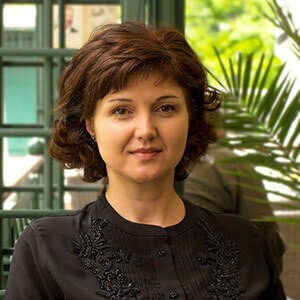 Julieta Serafimova has over 25 years of experience in the hospitality industry. She has joined NIKMI JSCo, owning company of city hotel group in 2003, before the opening of its first hotel in the capital - 5-star Grand Hotel Sofia, as its Director of Sales, and consequently she has been an essential part of the pre-opening teams of other two hotels in Sofia. In 2009 she has been promoted to the position of hotel General Manager, and in 2013 with the opening of third hotel, she has been appointed as a General Manager of the company Sofia Hotels Management, responsible for the development of existing and new hotels, which total room capacity will increase up to 650 rooms in total by the end of the year.

Julieta Serafimova has started her career in the hospitality at the age of 19 as a tour guide at one of the popular Bulgarian resorts – Sunny beach /by the Black sea coast/ and Borovets ski resort. Earlier in her career, she has been working as a Sales and Marketing manager at another two independent hotels in Sofia, and has obtained experience at Sales departments of couple of travel agencies. In 2012, Mrs. Serafimova has been rewarded by the Bulgarian Hotel and Restaurant Association as “Hotel Manager of the year”.

Julieta Serafimova is a visiting lecturer since 2015 at one of the most prestigious National Universities - New Bulgarian University, and member of its Program and Academic councils. Julieta Serafimova is a graduate of the College of International Tourism in Burgas, Bulgaria, and has an MBA in tourism from Sofia University “St. Kliment Ohridski”. She has successfully completed number of top management programs: in the United Kingdom - General Management in the British Industry, at Ecole Hoteliere Lausanne in Switzerland - Strategic Hospitality Management and Corporate Management Programs, at the Cornell University in the USA - Hotel General Managers Program.